High Energy physics is the study of the substructure which makes up matter. Through a series of massive joint programs, we have developed a truly remarkable window into the world of the very small. This is clearly a big subject, and I am just going to touch on things which I think are cool. I'm an outsider, so I can't guarantee that anyone else thinks these are cool. Probably the most important take-away is that there is not just one story here. Rather there is a mosaic.

Structure of the standard model

The standard model is the name given to the model used to explain high energy phenomena. Note the term model: this is a prime example of what we are trying to do in this class -- use basic reasoning to try to unify and explain observations.

The standard model has the structure of a relativistic gauge field theory. From your studies of phonons, you know what is meant by a field theory: There are a number of oscillating fields whose excitations are identified with particles. You also know what is meant by "relativistic" -- the theory is invariant under translations, rotations, and boosts. The "Gauge" part refers to another, more abstract, symmetry. Although you might not know the term, you already are familiar with one gauge theory: electromagnetism. Next week we will explore the properties of gauge theories in more detail. In many ways, todays lecture is a motivation for those classes.

The particles of the standard model are divided into four categories: Quarks, Lepton, Gauge Bosons, and the Higgs Boson. The quarks and leptons are fermions, and are associated with matter. The Gauge Bosons mediate interactions. The Higgs field (whose excitation is the Higgs boson) is found in the model as a way to give masses to the other particles. These particles are summarized in the following table 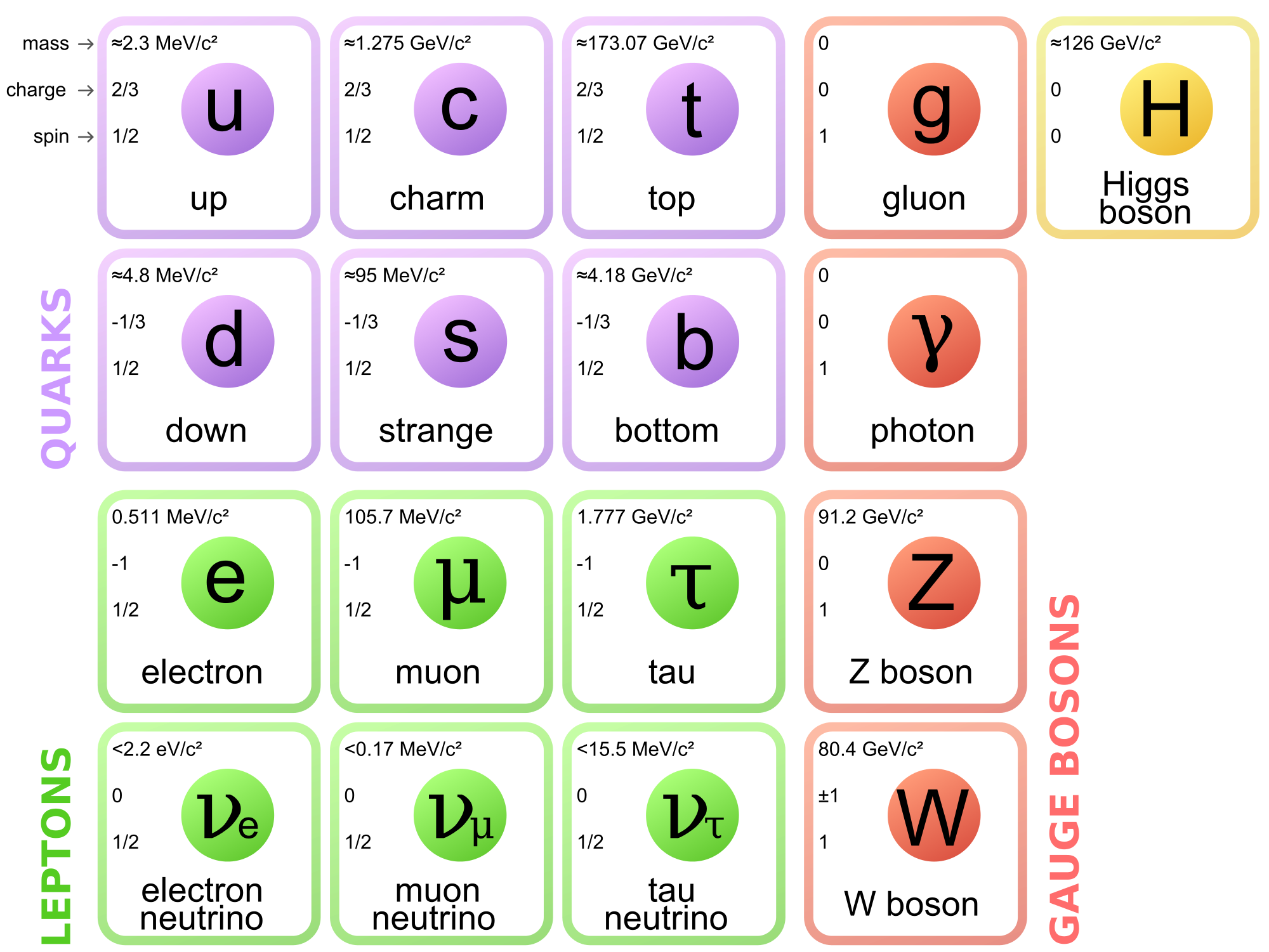 The six quarks (u,d,s,c,b,t) all have spin $1/2$, They are divided into three generations, Each generation contains a quark of charge $2/3$ and one of charge $-1/3$. Each quark also has an ``antiparticle" with the opposite charge. Ordinary matter (neutrons, protons) is made of up and down quarks. Each generation is heavier than the previous.

The six leptons are also divided into three generations. Within each generation there is an electron-like particle with charge $-1$ and spin$1/2$ (the electron, the muon, and the tau). Each generation also has a very light neutral particle, the neutrino. Neutrinos only interact via the weak interaction (which as it sounds is very weak.) Although neutrinos are spin $1/2$, as far as I know, only one spin state has ever been seen in nature. All of the leptons have antiparticles.

We will explicitly explore the Higgs field next Thursday.

A notable absence in this list of forces is gravity. Although some include the ``graviton" among the particles in the standard model, the standard model does not really include a description of gravity. The structure of gravity (which is geometric) appears to be inconsistent with a quantum field theory. In fact, it is even hard to find ways of combining gravity with quantum mechanics. Part of the problem is that nature provides very few examples of quantum systems where gravity is important. Thus it is very hard to empirically test such theories. To the extent that the graviton exists, one can give symmetry arguments that it should be a spin-2 particle.

The quarks and the gluons contain a quantum number known as ``color". It is somewhat similar to spin: A particle's color is spanned by three orthogonal states $r,b,g$, while an antiparticle is spanned by $\bar r,\bar b,\bar g$. The strong force couples so strongly to color that at low energies (where we live) all matter is "color neutral". A good analogy is that even though matter is made up of gazillions of electrons and protons, we never see very highly charged objects. The electromagnetic force is sufficiently strong that it is hard to make things more than a little charged.

Ideally this would mean there are 36 distinct Mesons ($u\bar u, u\bar d, u \bar s, u\bar c, u\bar t, u\bar b,\cdots$). However,
if you look at a table of mesons you will find over 140 of them. The story of this multiplicity really just has to do with history and naming conventions

You can imagine mesons as little hydrogen atoms (bound by the strong force instead of the Coulomb force). As with Hydrogen, they have excited states. These excited states have different energies -- and therefore are seen in different experiments. Before the organizing principle of quarks was developed, they were all given their own name. For example, the $\pi^+, b^+,\rho^+$, and $a^+$ are all bound states of a $u$ and a $\bar d$. These bound states all have different energies -- which in relativity translates into different masses. They also have different angular momentum, parity, and symmetry under charge conjugation.

The mesons are all color neutral -- for example being formed from a red quark and and antired antiquark. More than this, they are {\em color singlet}. Think of having an upspin and a downspin. A singlet is the spin zero combination $|\uparrow \downarrow\rangle-|\downarrow\uparrow\rangle$. Thus the color quantum numbers of a meson are actually $r\bar r +b\bar b+g \bar g$.

The Baryons are made of three quarks, which also form a color singlet: (rbg-brg+bgr-gbr+grb-rgb). This color wavefunction is totally antisymmetric under exchanging two quarks. Thus the spatial + spin parts must together be symmetric. It turns out that this symmetry requirement forbids the existence of a spin-1/2 baryon made up of three up quarks. In practice you never see any baryons with more than one heavy quark. Interestingly, for a given quark composition (such as $uud$) and total angular momentum $J=1/2$ or $3/2$, there is only one baryon seen. This is kind of like there being only two allowed states of hydrogen.

The strong force preserves the total ``number" of each type of quark. By this means that it cannot change the number of up quarks plus the number of down quarks. On the other hand, it can convert a $u\bar u$ into a $d\bar d$ or a $s\bar s$. It should therefore come as no surprise that the "flavorless mesons" are mixed. The $\pi^0$ is $u\bar u-d\bar d$ and the $\eta$ is $u\bar u + d\bar d+s\bar s$. Note, these are both eigenstates of isospin. It appears that isospin is a pretty good symmetry of the Standard model, and states of different total isospin have different energy.

Probably the most important thing to say about gluons is that they not only interact with quarks, but they also interact with themselves. This, for example, is very different from electromagnetism. The most dramatic result is that the analog of Coulomb's law for the strong interaction looks more like Hooke's law. That is the quarks in mesons are effectively attached by springs. Like a spring, at very very short distances, the forces become negligable. This is known as "asymptotic freedom" -- the fact that very high energy (short lengthscales) quarks act as free particles.

In the last decade or so, there has been some evidence of bound states of 4 quarks or 5 quarks.

One peculiar feature of the Strong interaction is that it gets really weak at very short distances (it falls off logarithmically). Thus you can use independent Quark models to understand very high energy processes.

The crazy (and most important weak interactions) are those that transmute the flavor of a quark.
A down-quark can turn into an up-quark, emitting a W (or vise versa). Equivalently, an up-quark can
recombine with an anti-down to produce a W. The weak force even does this across generations:
a charm can turn into a down, or a strange into an up: in each case emitting a W.

This means that a neutron ($udd$) can convert into a proton ($duu$) by emitting a W. The
W then decays into an electron and an electron antineutrino. This net process releases energy,
and happens spontaneously. It is pretty slow though (the lifetime of a free neutron is about 10 minutes).
The proton is stable
because it is the lowest mass spin 1/2 baryon (recall $uuu$ is not allowed by symmetry).

In a stable nucleus, the neutron is stabilized by the presence of the other nucleons. Thus the details of the weak interaction in a many-body setting determine the
which isotopes are stable. This decay of a neutron into a proton, electron, and antineutrino is known as $\beta$ decay.

Another classic example of the weak interaction doing strange things is
the neutral kaons, $K^0$ ($d\bar{s}$) and $\bar{K}^0$ ($\bar d s$). The weak force couples these through a second order process, meaning that the if you produce a $K^0$ it will oscillate between $K^0$ and $\bar{K}^0$. You can see this in an experiment (by looking at the decays into leptons).

The funky thing, though, is that the combinations
$K$-short=$K^0-\bar{K}^0$, and $K$-long=$K^0-\bar{K}^0$, have different quantum numbers. The $K$-short can decay into two photons, while the $K$-long can only decay into 3. Thus the $K$-short is very short lived. Thus eventually this oscillation {\em decoheres} and you end up with just a beam of $K$-long.

This Kaon story smells similar to neutrino oscillations -- which is another symptom of the Weak force acting strangely. Weak decays produce neutrinos of definite flavor. Unfortunately those flavors are not conserved quantum numbers. In other words -- in the flavor basis, the Hamiltionian for a static neutrino is a $3\times3$ matrix, and that matrix is not diagonal.

To make matters worse, the weak interaction is handed. It treats right handed particles different from left handed. An extreme example, already mentioned, is that all observed neutrinos are left-handed, and all observed anti-neutrinos are right-handed. [That is the spin of a neutrino always points opposite the direction of motion -- and vice-versa for an antineutrino.] This is a little strange, as you can always do a Lorentz boost into a frame where the neutrino has the opposite handedness. Presumably this means that there can exist right-handed neutrinos, but they just aren't produced.

Unfortunately Neutrinos are all produced with speeds near the speed of light (in the lab frame) so it is hard to do this experiment. Worse, neutrinos only interact very weakly with matter, so its hard to detect them.

The weak interaction also treats particles and antiparticles differently (CP symmetry). This effect is believed to be related to the observed asymmetry between matter and antimatter.

In discussing electromagnetism in this context you often hear people talk about the fact that one can "unify" the electromagnetic and weak forces. This means that you write down a field theory for the gauge bosons, where the different manifestations ($W,Z,\gamma$) are essentially just different transverse modes of the same field. At the level of this course we don't really care if there are separate fields for electromagnetic and weak forces. That is a pretty subtle detail of the underlying theory. [Though I am sure that someone who makes their career out of studying field theories would disagree, and could give me all sorts of reasons why this unification is significant.]